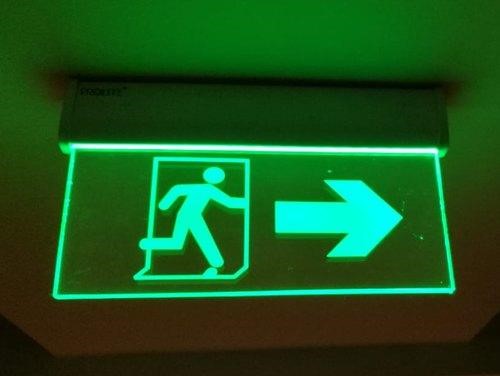 One of the most important precautions in terms of environmental safety relates to fire which is why emergency exit lights are worth deploying in the existing framework.

It states that non-domestic structures should cater to a safe environment including situations of the main power cut. It thus mandates the provision of emergency exit lights as an adequate safety feature.

Why is it necessary to deploy emergency exit lighting?

In case of failure of the power supply, emergency exit lighting provides a sufficient source of light immediately and automatically so that people can move out of any building at ease and with confidence. Generally, when a fire breaks out in an enclosed space, darkness prevails which then triggers fear, panic, and confusion among others. During such events, the likelihood of getting injured is more, inviting further obstructions in the rescue work. However, emergency exit lights lit up the possible evacuation routes whether lobbies, staircases, key boxes, or places having fire extinguishers to make the evacuation procedure fast during alarming circumstances.

It’s critical to implement a well-designed and properly planned emergency exit lighting system in advance to assist in the safe evacuation.

How to use it correctly?

Following a load-shedding, the emergency exit lights must be put on for an hour. On the other hand, for structures with sleeping accommodation, the turn-on time goes up to 3 hours.

Now, you can get the best Emergency exit lights in Dubai from RESCO and put the fear of fire to rest.

Emergency exit lights are of different types. The most conventional ones are the internal and external bulkhead fittings connected to the main electrical wire. They can be operational for up to 3 hours without the main power and be recharged to restore the source of power.

Illuminated exit indications are another kind of emergency exit light that are used to demarcate the routes for the exit.

Fluorescent marker tape, floor disc, and paint are used to signal the changes in the level of structures such as ups and downs. It also works on the staircases to guide people in smoky conditions and those with partial eyesight.

They function with the help of a switch and can be left on throughout or used in case of load shedding. They are used in public venues like movie halls to prevent pitch darkness backed with the capacity to operate during a power cut.

It functions only during power cuts, often supported by a battery that draws power by self-charging. Any emergency lighting needs to be tested daily to abide by the power and other safety standards.

Where do you need emergency exit lights?

Every monument has an individual requirement of emergency exit lights. Also, on the other hand, the setup demands can vary within a single building. That being said, some parts might have a flow of natural light while others might need to be artificially lit up. Considering a structure that functions at night time, it would require emergency exit lights at every point. Otherwise, if there is a sufficient, consistent and broad source of a street light that everyone is familiar with, emergency exit lights won’t be needed in such places.

Ideally, emergency exit lights must be placed at

It’s important to cast ample light in such places rather than providing separate lights at each place.

RESCO, a reputed label in Dubai and across the UAE is known for providing the best fire safety services. Being qualified and experienced installers of emergency lights, exit signs, and panic doors, the company offers both discrete and Central Battery systems along with the provision of compliance checks to meet the legal standards. Their products are driven by varying power capacity, autonomy, and IP grade besides being equipped with the latest LED technology to cut down on cost and optimize energy levels during operation. Moreover, they come fitted with plexiglass diffusers to spread light over a larger area, especially in misty conditions. Such lights are easy to install and can be hung from the ceiling or walls whose brightness can be adjusted from time to time.